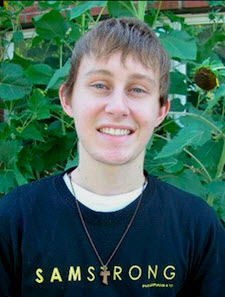 SAMSTRONG: Search For The Cure

Founder of SAMSTRONG: Search for the Cure

Sam Featherstone was a 19 year old college freshman who battled brain cancer for over three years. He had multiple rounds of chemotherapy and radiation and three brain surgeries but despite all of these efforts, the cancer persisted and returned.  Sam passed away the morning of January 2, 2013.

Sam was attending IUPUI on a full scholarship and had aspirations to become a pediatric oncologist, having received provisional admittance to the Indiana University School of Medicine class of 2016. Sam wanted to become a pediatric oncologist so that he could help children with brain tumors. But when he realized that his dream was not to be and that his time left on Earth was brief, Sam set new goals for himself:  to raise awareness of the devastation caused by pediatric brain tumors, and to raise money for research to help find a cure for childhood brain cancer.

Sam mobilized family and friends to create "SamStrong: Search for the Cure," a fundraiser held on Thursday, December 27, 2012 at St. John the Baptist Church in Newburgh, Indiana.  Even as his health rapidly declined, Sam rallied his community to extraordinary heights of giving.  In just a few very short weeks, Sam raised over $180,000 to fund pediatric brain cancer research at St. Jude Children's Research Hospital.

His work done, Sam slowly slipped away from us in the days following the event, and he passed from this life less than a week later.  Remarkably, though, his selflessness, strength, and determination continue to inspire not only those who knew him but many who are only now hearing his story.  As a tribute to Sam, so far over $280,000 has been donated to St. Jude to battle pediatric brain cancer.  Thanks to Sam, new treatments may be developed to prevent or cure this disease in future generations of children.

Memorial contributions in Sam's name may also be made by clicking the "Donate Now" button.   ALL money donated in Sam's name will be used only for brain tumor research.  Thank you for continuing Sam's final mission to defeat cancer.