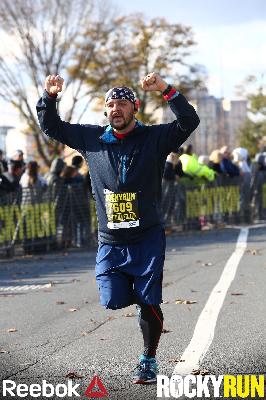 Over the past year I have developed the goal of running in the NYC Marathon. In November of 2018, I committed myself mentally to run the Marathon. The first thing I did after deciding to run it was to reach out to Shannon Kay​ and ask her to run it with me. She is one person that I knew could do it and that would motivate me and hold me to task. When I asked her, Shannon responded that she would love to do it and wanted to know how to get in. I told her that I was going to have to raise funds for a charity in order to secure as spot (I didn't know which one yet), but she could probably get in based on her military service. Her response was "Yeah, I probably could, but I like the fundraiser idea better anyway. St. Jude's all the way!"  She told me she couldn't commit yet being in the military because she could be deployed at the time, but that she was trying to get into an officer program and if she did, she would be around and she would definitely run it with me.  Unfortunately, that was the last conversation I had with Shannon as she shipped out a few days later and was killed by a suicide bomber in Syria.

Now my resolve has grown stronger. I knew Shannon would be pushing me to be my best and holding me accountable and that she still will. She will be with me every step of the way in training and in the NYC Marathon. It was Shannon's intention to run for St. Jude's even though she could have just taken the easy way and gotten in without the extra effort of raising funds. When I found out that she had been killed it made my choice easy that I would run for St. Jude's in Shannon's honor.

I have committed to raising $3500 for St. Jude's for Children.  Because I know how important this was to Shannon and that she would have been raising $3500 herself, my girl is to raise at least $7000, thus making both of our contributions to this great cause. If you can help me to meet that goal in any way, whether through any size donation or if you can just share this post widely so that I can reach as many people as possible and raise as much funds as possible and honor Shannon in the best way I can. I would be very grateful for any help in exceeding this goal.

I am a St. Jude Hero! I have chosen to run for a reason bigger than myself by fundraising for the kids and families at St. Jude. I am training to cross the finish line on race day and with your donation we can cross the fundraising finish line together because the money you donate helps find a cure for childhood cancer.

Donate today to help me reach my goal. Even when the race is over, the fight to end childhood cancer continues.