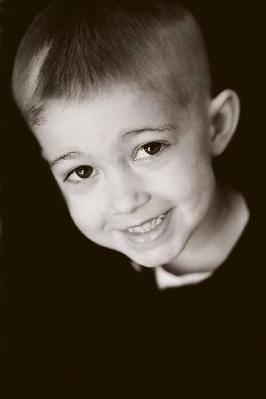 I am asking, no, begging for your support in the fight against childhood cancer!  On December 6, 2006, my beautiful son Sam was diagnosed with an inoperable brain tumor called DIPG, diffuse intrinsic pontine glioma-he was 4 1/2 years old.  Within days we moved our family temporarily to Memphis, TN. There, at St. Jude Children's Research Hospital, Sam received 31 radiation treatments, chemotherapy, and various other treatments and procedures over the next two month.  Sam fought valiantly and bravely for the next year.  His positive attitude and courage were nothing short of awe-inspiring.  He endured needle pokes, took his meds, learned to compensate as his body began to fail him, all without complaining or ever asking why this was happening to him.  He traveled frequently, started kindergarten, flew back and forth to Memphis every month for follow up visits, played with friends, enjoyed his superheroes but mostly, he LIVED his life to the fullest. Sadly, Sam lost his battle to cancer on February 25, 2008, two months shy of his 6th birthday.

So, in honor of my favorite little superhero, Sam, and all the other little heroes who are in the fight of their lives, I am running as a St. Jude Hero in the 10K portion of the St. Jude Marathon in Memphis, TN, on December 5, 2020, one day before the 14 year anniversary of Sam's diagnosis.  I, along with my friends and family, have formed Team SuperSam, and we are committed to fundraising for St. Jude and fighting to put an end to pediatric brain cancer.  This race is for Sam, and all of the other angels who lost their battles, as well as for all of those little heroes who are still in the fight of their lives.

I'm so very thankful for the 5 1/2 short years I had with such an incredible little boy, and I'm thankful for superheroes and dragonflies!  Thank you, from the bottom of my heart, for joining this fight with us!

Donate today to help me reach my goal. Even when the race is over, the fight to end childhood cancer continues.